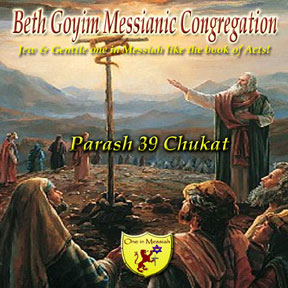 Moshe/Moses is taught the laws of the Red Heifer, whose ashes purify a person who has been contaminated by contact with a dead body. The ashes that would have been in the jars holding the water at the wedding of Kanah in the Galil.

After 40 years of journeying through the desert, the people of Israel arrive in the wilderness of Zin. Miriam dies and the people thirst for water. God tells Moshe to speak to a rock and command it to give water. Moses gets angry at the rebellious Israelites and strikes the stone. Water issues forth, but Moshe is told by Adonai that neither he nor Aharon/Aaron will enter the Promised Land.

Aharon dies at Har Hahar and is succeeded in the High Priesthood by his son Elazar. Venomous snakes attack the Israelite camp after yet another eruption of discontent in which the people "speak against God and Moshe"; God tells Moshe to place a brass serpent upon a high pole, and all who will gaze heavenward will be healed.  This is a foreshadow of the Lord who became sin for us and anyone who looks to Him shall be healed. The people sing a song in honor of the miraculous well that provided the water in the desert.

Moshe leads the people in battles against the Emorite kings Sichon and Og (who seek to prevent Israel's passage through their territory) and conquers their lands, which lie east of the Jordan.

you do not have to have a paypal account to use donate button.

You can use a debit card.